Generally, when cryptocurrency enthusiasts hear the word “premine”, they’re disgusted. But, wait! Hear me out… I’m going to change your mind. Here’s why and how, a premine can be a rather good thing, for a blockchain.

If a coin is created, with no premine, and no ICO(that’s a topic for another day) there’s no funding to pay for services that the development team can’t provide… Suggesting those skills aren’t handy within the coin’s development team. This issue can halt a project. Fast.

“We had all the skills in house, but we wanted to attract more users from outside and reward them with grs instead of with btc.” – Jackielove4u(GRS Developer)

Where do developer funds go?

“Pay for stuff we can’t do ourselves or find volunteers for. Most recently that’s been the development of GPU miners, hosting infrastructure, lawyers.” – Gertjaap(VTC Developer)

Plenty of places! Not only do the core developers deserve a cut of the goods(if desired), for all their hard work, but they also need a source of currency as an incentive for bounties(development bounties in which community members can fulfill), exchange listing fee’s, and for their own exchange(if they have one… Like VertBase).

Typically, without funding to feed the developers, they can either only allocate a certain amount of time to working on the coin… Or are incredibly unmotivated to work on the coin.

Additionally, without bounties(or bounty funding) there are much less opportunities for the community to assist in the coins development. Which doesn’t just complete development tasks… They also boost the community’s moral as there’s a sense of accomplishment in knowing you’ve contributed to the project.

When it comes down to exchange fee’s, it seems that none of them are the same. Below is a chart(awful image) with information as to what each exchange charges to be listed. 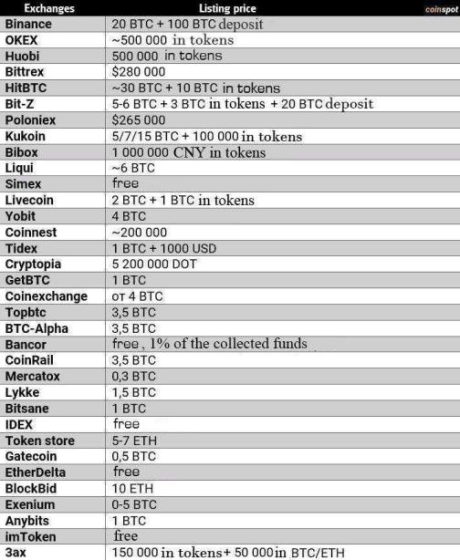 If the coin doesn’t have a premine, the total of the developer’s donation fund is expected to cover listing fee’s… But, for a coin with low popularity can you really expect for them to be capable of covering said expenses, with donations?

How Essential Is A Premine?

I’d say that weather or not a coin should depend on a premine varies, based on what the blockchain’s focus is, how fast they think they can manage to grow, and how much the community contributes to it’s creation.

For a coin with a larger and more vocal community, it may be essential to hold bountys(for both the community and developers). However, for a small project/science focused coin, with all of the needed skills in-house(as Jackie mentioned above), a premine really doesn’t seem to be necessary.

The funding will help no matter what, however if you don’t want for the cryptocurrency community to seem biased, or slightly concerned about the premine(and you have proper funding/skills)… You shouldn’t do one.

Premines can go extremely far! However, there have been some use-cases where they don’t exactly function as nicely as they appear.

There have been many coins that appear into the crypto-space immediately after initiating a premine, in which they then hault all development after selling off all their coins. This results in the developers running away with a small fortune, and scamming all of it’s investors.

This is why it’s important to pick a coin(even if it doesn’t have a premine) that appears to have a development team that’s motivated, and dedicated to watching the coin succeed.

If premines are executed properly, they can provide what would seem to be, must-have funding for exchange listings, bounties, and feeding the core developers. It isn’t needed, and it’s existence may scare off a demographic of coin enthusiasts. It all comes down to the priority of the developers, and weather or not they think initial funding is more important than the communities prejudice first reaction… Which seems to dissipate as the developers show more and more commitment to the project.

There have been many cases where premines have gone bad/been a scam. However, when they are done properly, they can do amazing things.

What Does It Take To Create A Coin?

There’s been countless amounts of blockchains created, and currently running on the internet within the past few years. With the amount of different blockchains there are, you’d think that they’re either incredibly easy to make, Read more…