What Is A Pump And Dump?

What Is A Pump And Dump?

A Pump and Dump, is when the cost of a coin(or stock) sky rockets, due to an insane influx of demand, which is then followed by a fall all the way back to the ground to where it was before, or even lower. This often happens due to a news release, or a coordinated pump and dump attack created by a group of people, or one person convincing the masses to invest.

Pump and dumps typically hurt coins(or stocks), however sometimes they are little jump starters to a new climb. It all depends on why the pump is initiated in the first place.

Types Of Pump And Dumps, And Their Creation.

The pump is the best part, and no matter what coin(or stock) your in, it’s going to feel amazing… But, all pumps are created differently, and it’s important to know how it made, in order to depict whether or not you should put your money into it(suggesting you’re one of the first to see the news/reason for pump).

Healthy Pump: Occurs when good news is released about the coin(or stock), or something positive happens that creates a large amount of people wanting to buy the coin/stock.

Healthy Dump: After the pump, the price is a hyped over what it should be, from here it will make a slow(er) correction downward, to where the buyers and sellers think it should be settled.

Unhealthy Pump: Lets say a hacker get’s a hold of a million emails, and sends an email out convincing people to buy a coin(or stock). Believe it or not, some of those people will buy in(after the hacker has bought in at minimal price). This influx of users wanting the coin for “free money”, or some other reason, causes the price to pump. This can also be caused by coordinated pump and dump groups, which are groups of people who create their own pump and dumps(obviously only a few of them can profit).

Unhealthy Dump: Pumpers are afraid they will be left with nothing, or want to get out while they can. Causing them to massively sell off, resulting in a giant and fast drop back down past to the mean line, where it will bounce.

Pump and dumps almost always look the same(depending on how long they go for). The chart below is what you’ll usually see. 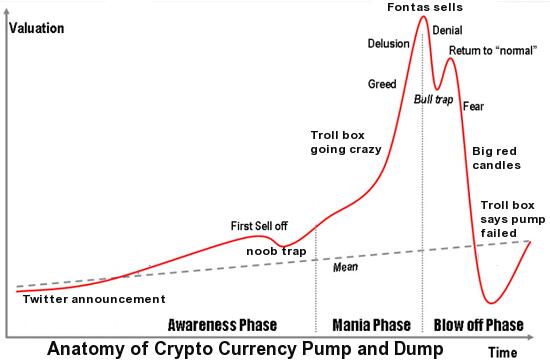 Should I Take Part In Pump And Dumps?

Nine times out of ten, I would say no. However, if you manage to see one forming(on your own or by a trusted friend) before the pump has really has started. Try it out. You never know if you’ll be one of the 20% or so that mange to make a quick buck. Think of it like a gamble(don’t gamble too much), the hardest part is knowing when to get out, and not buying into your greed.

If you’re asking if you should take part in a pump and dump group, my answer is no, for the following reasons.

Pump and dumps can be either a good, or bad thing for a coin/stock. It all depends on which side of the spectrum you’re on, and which variables are in play.

It’s important to note, that pump and dumps are not massive sources of quick, and easy money. It’s a major risk, with a giant reward. I don’t recommend putting your money into one unless you forsee it from far ahead(and know what you’re doing). However, I think that every person should partake in one so they can experience it themselves, and form their own opinions.